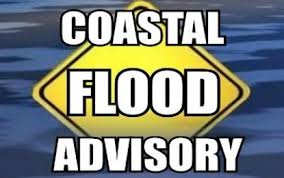 Moderate to heavy rain is expected to move through the region Monday afternoon through Monday evening. The water table is high due to recent rainfall, including over an inch of rain Saturday and Saturday night.

Do not drive on a flooded street.  This creates a wake that can damage private and public property.  The water is often deeper in the street than it appears. Wind gusts will approach 25mph in the afternoon.  Contractors should secure job sites, and property owners should secure objects prone to gusty winds, including trash cans and patio furniture.

Continue to monitor the forecast on traditional media outlets.  Here is the text of the Coastal Flood Advisory and the Flood Watch issued by the National Weather Service:

FLOOD WATCH IN EFFECT FROM MONDAY MORNING THROUGH LATE MONDAY NIGHT…  The National Weather Service in Mount Holly has issued a  * Flood Watch for portions of northern Delaware, northeast  Maryland, New Jersey, and southeast Pennsylvania.  * From Monday morning through late Monday night  * Moderate to heavy rain will move through the watch area Monday   through Monday evening. Areas within the watch received 3 to 4   inches of rain Saturday night into Sunday and area creeks,   streams, and rivers are all running high. Additional, heavy  rainfall may result in more flooding across the watch area.  * Leaf clogged drains and coastal flooding could further   exacerbate flooding issues. River flooding may continue into  Tuesday, well after the heavy rain has ended.

PRECAUTIONARY/PREPAREDNESS ACTIONS…  A Flood Watch means there is a potential for flooding based on current forecasts.  You should monitor later forecasts and be alert for possible Flood Warnings. Those living in areas prone to flooding should be prepared to take action should flooding develop.

…COASTAL FLOOD ADVISORY IN EFFECT FROM 8 AM TO 2 PM EST MONDAY…  The National Weather Service in Mount Holly has issued a Coastal Flood Advisory, which is in effect from 8:00 AM until 2:00 PM Monday.

* LOCATIONS…Coastal areas of southeastern Burlington County,   Atlantic County, Cape May County and Cumberland County.  * TIMING…High tide on the New Jersey oceanfront occurs between   9:00 AM and 10:00 AM Monday morning. High tide on the back bays   and along Delaware Bay occurs later than the high tide on the   oceanfront.

* COASTAL FLOOD IMPACTS…Up to one foot of saltwater inundation   above ground level is possible in low-lying areas near  shorelines and tidal waterways. Roadway flooding is expected.

* WAVES…Wave heights on the ocean waters off the coast are   expected to be 3 to 5 feet.

PRECAUTIONARY/PREPAREDNESS ACTIONS…  A Coastal Flood Advisory means that minor tidal flooding is expected. Minor Tidal flooding often results in some road closures. Usually, the most vulnerable roadways will flood.  Do not leave your vehicle at a location that is prone to tidal flooding. Do not drive your vehicle through flood waters. The water may be deeper than you think it is. You will be putting yourself in danger and your vehicle may be damaged, leading to costly repairs.

Become a member of the Avalon CERT Team