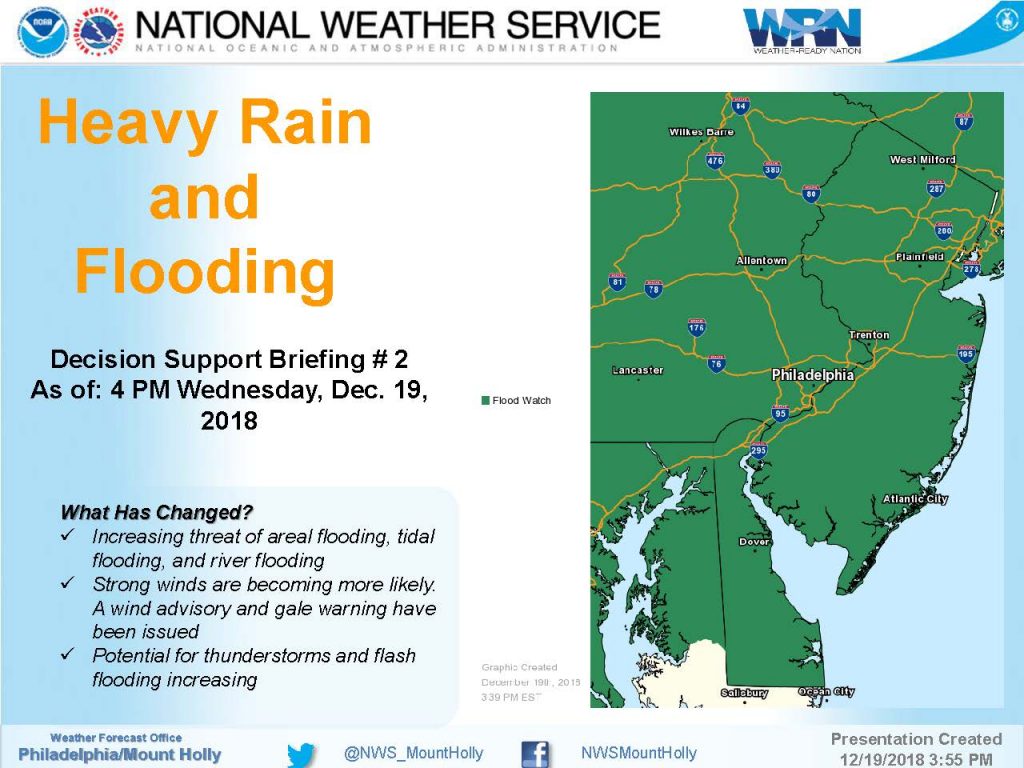 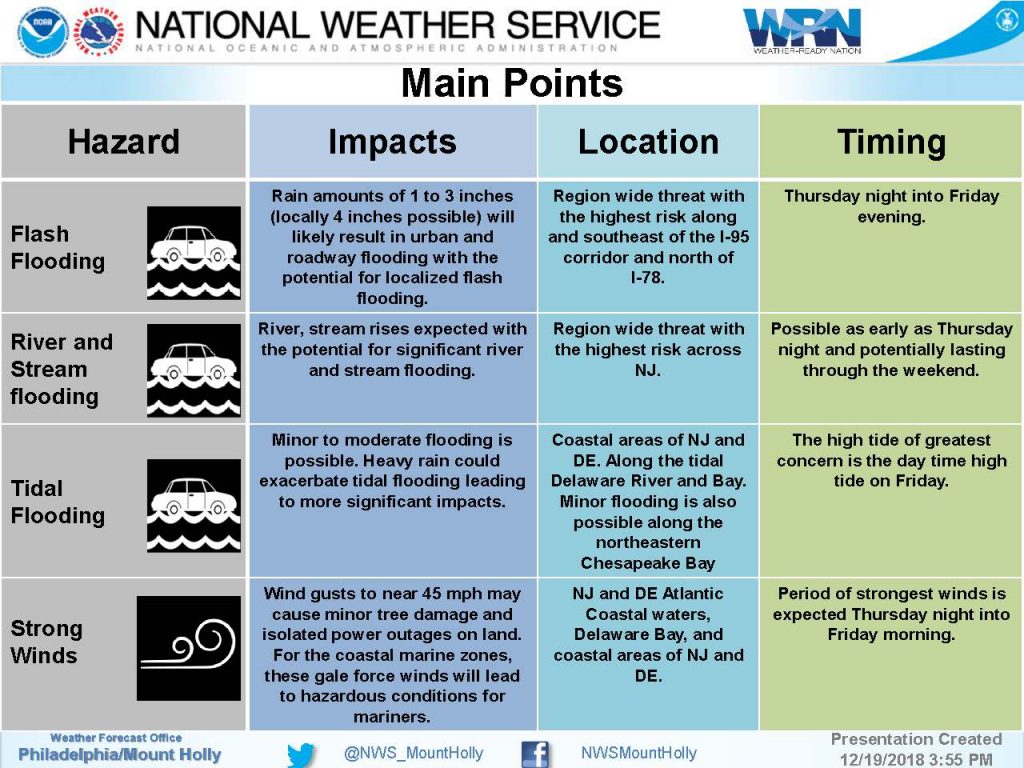 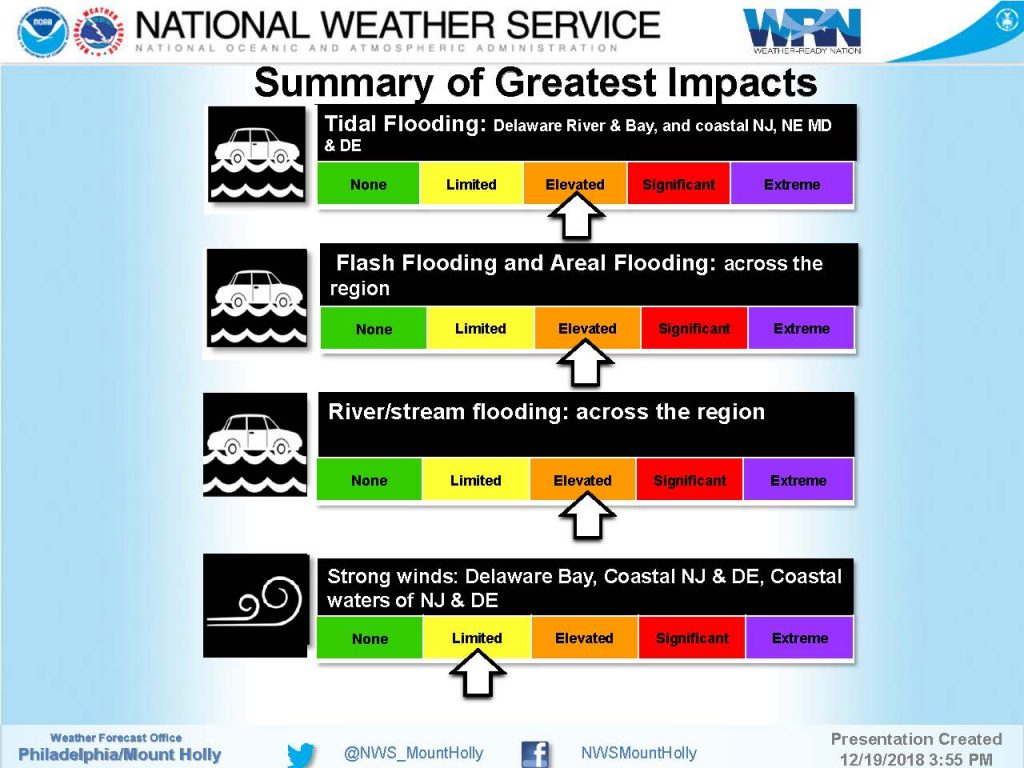 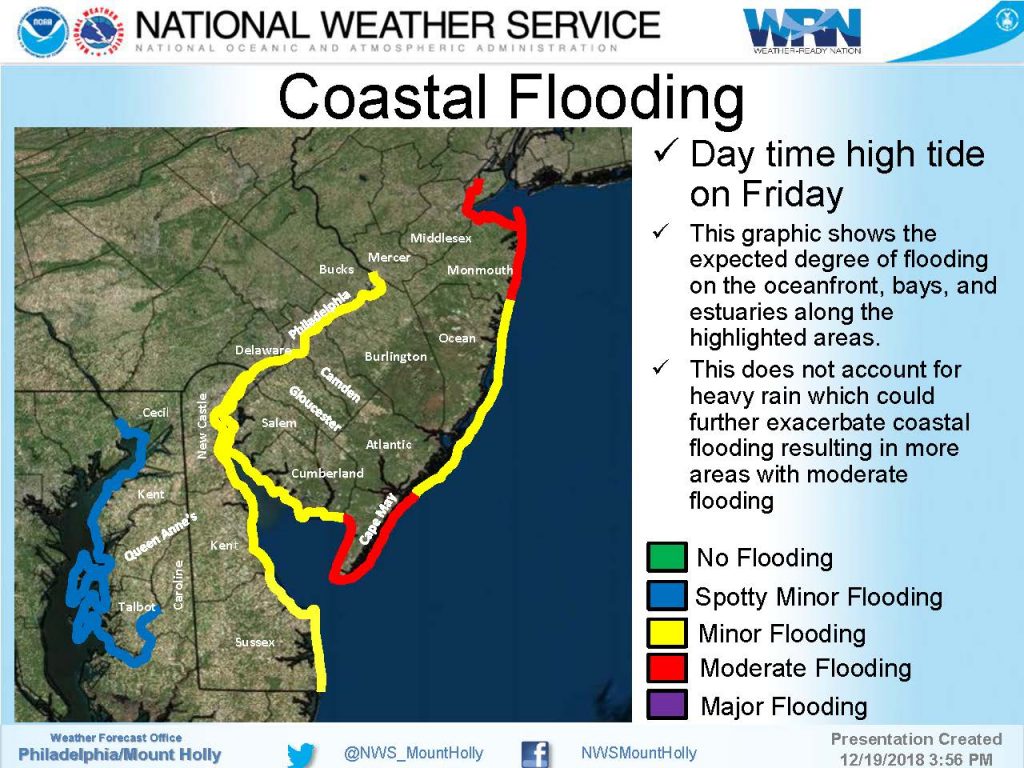 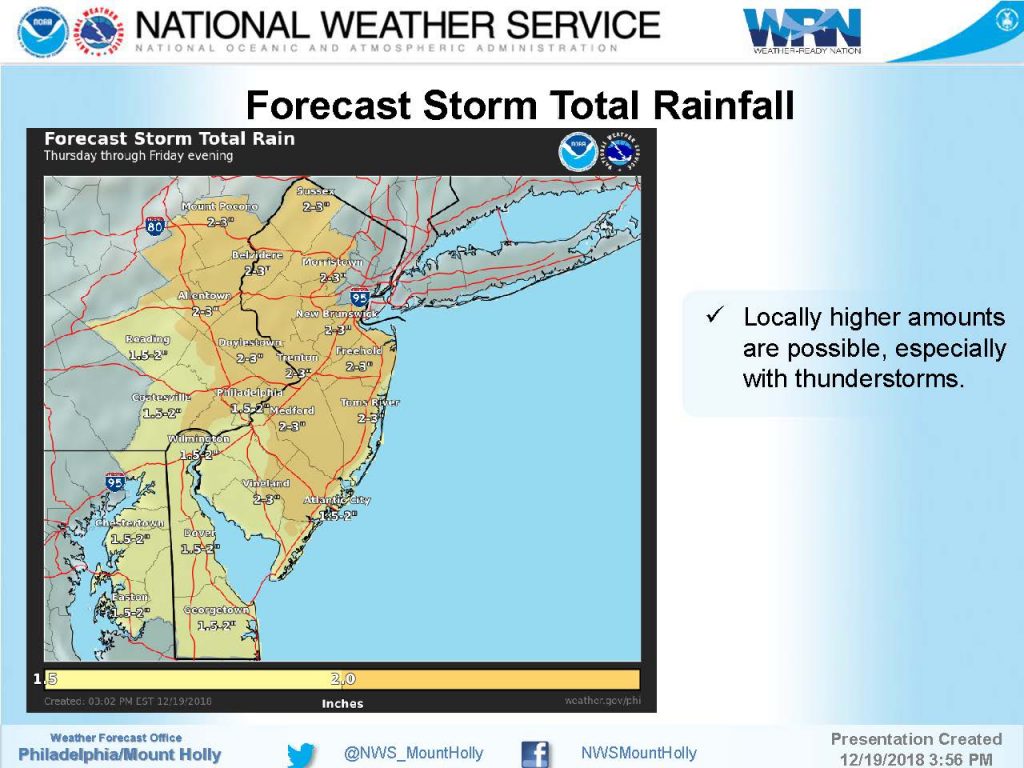 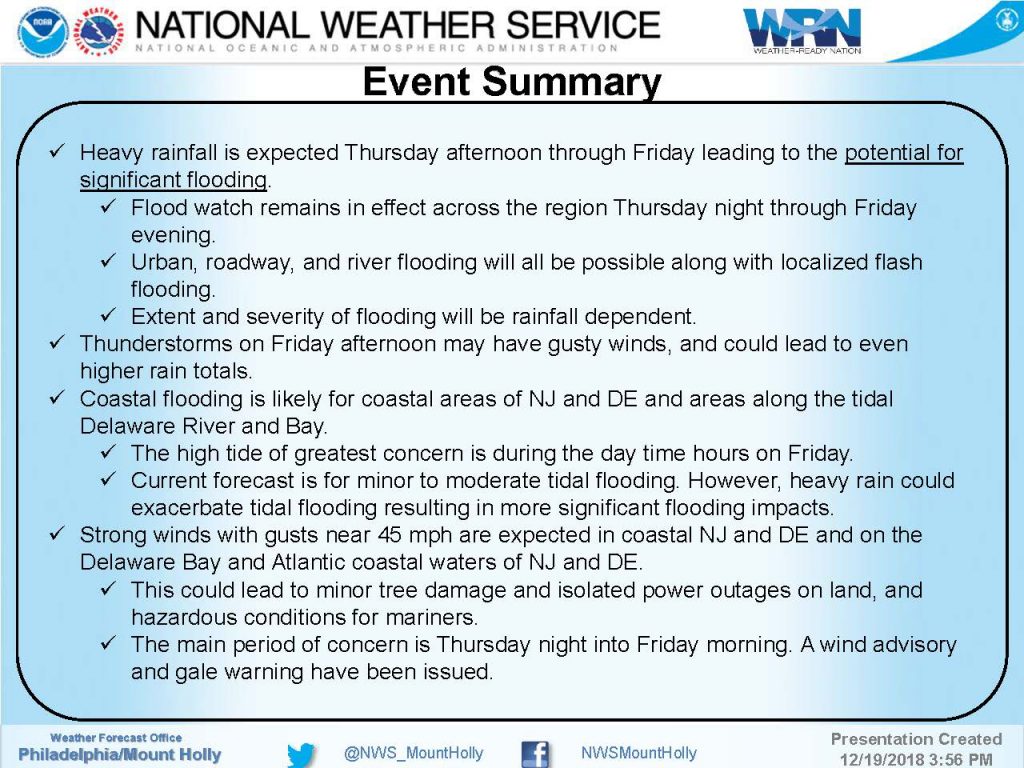 The National Weather Service has continued the Flood Watch for the region, and has added a Wind Advisory for an approaching storm that will bring heavy rain and gusty winds to our region from a period from Thursday evening through Friday night.  Up to three inches of rain are expected in most areas in southern New Jersey (higher amounts in some locations), and wind gusts will approach 50mph.  There is also the potential for minor to moderate tidal flooding at times of high tide on Friday.

The Friday high tides bring the most concern for the potential for minor to moderate coastal flooding.  High tide will occur Thursday evening at the Townsend’s Inlet Bridge at 5:56pm.  High tide occurs Friday at 6:22am, and again at 6:46pm.  Street flooding may occur due the compounding factor of tidal flooding with heavy rainfall.

Turn around, don’t drown.  Never attempt to drive on any flooded street as this puts you and your vehicle at risk, and causes an unnecessary wake that can damage property.  Driving on a flooded street adjacent to businesses may push water under doors causing damage that can easily be avoided by taking a different route to your destination.

The Borough of Avalon has developed a flood risk map for heavy rainfall and tidal flooding events.  Please review the map and make best decisions to secure your property and potentially move vehicles to areas of our community that are not subject to flooding.

If you have any emergency, dial 911.  Continue to follow traditional media outlets for updates to the forecast as current weather alerts may be upgraded.  The Borough continues to be in contact with our partners at the Cape May County Office of Emergency Management for updated information from weather and state agencies.

Here is the text of the Flood Watch and the Wind Advisory issued by the National Weather Service on Thursday morning:

…FLOOD WATCH REMAINS IN EFFECT FROM THIS EVENING THROUGH LATE

The Flood Watch continues for

southeast Pennsylvania, including the following areas, in

* From this evening through late Friday night.

* Widespread rainfall of 1.5 to 2.5 inches, with locally higher

drainage. There is also the potential for significant river

flooding. The flood risk will increase where heavy rain and

embedded thunderstorms move over the same area, even potentially

* In addition to the freshwater flooding, the combination of heavy

rain and increased tide levels during the times of high tide

Friday morning will result in minor to locally moderate coastal

flooding along the Atlantic, Delaware Bay, the tidal Delaware

River, and the eastern shores of the Chesapeake Bay.

You should monitor later forecasts and be alert for possible

Flood Warnings. Those living in areas prone to flooding should be

…WIND ADVISORY REMAINS IN EFFECT FROM MIDNIGHT TONIGHT TO 10 AM

limbs could be blown down and a few power outages may result.

A Wind Advisory means that very windy conditions are expected.

Winds this strong can make driving difficult, especially for high

such as patio furniture and garbage cans should be secured.